Being from somewhere where the winters are relatively mild (in the low country of Colorado, below 0°F is rare, and wind chill is not a thing when you're butted up against the mountains), I never had to give too much thought to winterization. Now, however, we have an old house. I have no idea how good the insulation is, either - we won't have any idea until the bills come rolling in. That being said, I took some pointers from Hammers and High Heels (seriously, go look at this blog, it rocks!) and bought some inexpensive window insulation:

It was about eight dollars or so at Menards, so well worth the investment if it pans out.

It may not have been the best idea, but we are starting with the patio windows. The poor three-season patio is very drafty and we have huge windows in the front of the house, so making sure that drafts didn't hit those windows seemed like it would be a good idea. Hopefully it pays off!

Installation was fairly simple. Just line the windows with double sided tape, cut the plastic to size, and smooth the plastic out over the tape. Then comes the fun part! 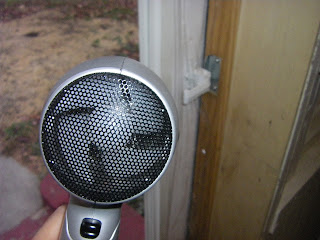 Hit that plastic with the warm air from a blow dryer on HIGH, then watch as the plastic slowly shrinks and lands taut against the window. Our storm door is still missing glass and will probably have to be replaced (but first things first, getting that damn furnace running properly!), but this should help when the biting Minnesota wind comes to call.

While the patio won't be warm by any stretch of the imagination, at least it won't be a major entry point for strong winds coming in from the west. Phew!

I was only able to finish half the windows in the front patio tonight before turning in to blog and having friends over for dinner, but luckily I'm a second-shifter and I'll have some time in the morning to finish up.

I almost forgot to mention that this morning I was able to pitch the yeast into the cider must in my carboy. It's sitting on our kitchen floor. I eagerly await the appearance of bubbling and the delicious smell of millions of little yeast cells at work. Yum!

Things you will probably read about here:
Adventures in DIY
Twin Cities events, arts, and culture
Board and video gaming
Homebrewing

Redd in the City
I'm married to the ever-awesome Blu and brand-spankin' new to town.